Ascent Towards a Type I Civilization

As a species that is in the midst of more than a century of massive technological evolution, homo sapiens, with all of their blinking gadgets and other paraphernalia, rarely fancy themselves as primitive.  It comes then as a surprise to most to find out that we have still yet to attain a civilization status of Type I.  That's right!  Take that, fragile collective ego of mankind.  Despite all that you may feel your species has accomplished, you presently belong to a Type Zero civilization, as did your cave-dwelling ancestors.

While we do indeed have access to vastly superior technology than homo sapiens have had in their long history, we do not yet qualify as a Type I.  We are, however, well on our way.

So, what is this civilization classification system, and who established it?

The system measures the technological advancement of a civilization by assessing the amount of space it takes up, and the extent to which it utilizes the energy resources within that space.  It is known as the Kardashev scale, and can be expressed in terms of the order of magnitude of power that a civilization extracts for its personal use.  This very forward-thinking and pragmatic scale was proposed in 1964 by Soviet astronomer Nikolai Kardashev.  A civilization that has attained a certain level of technological development is described as follows: 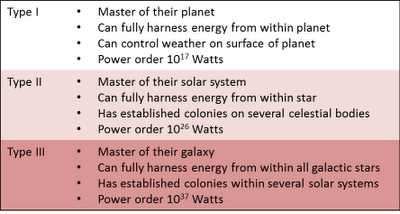 Universal Gravitation (Journey to the Center of the Earth)

Having seen parts of the original film and the previews for what must have been a horrible remake, I can assert with confidence that the physics behind a Journey to the Center of the Earth are of much greater interest than any film that goes by that name (from the preview of the latter, it appears that dinosaurs currently reside somewhere within our planet, where they are safe from all the pesky breathable air up here).

While we usually think of the gravity due to planets when we reside on their surface or orbit around them, it is intriguing to consider the role that gravitation plays inside a large body.

Newton's law of universal gravitation states that all bodies having mass emit a gravitational field and thereby attract all other masses to them.  The magnitude of the attractive force (which, by Newton's third law, acts on both bodies) is governed by the mass of each body, as well as their proximity to one another.  The force is stronger for more massive bodies, and increases as the gap between them reduces.  In equation form, the magnitude of the gravitational force, Fg (in Newtons), that acts on both bodies is given by

Read more »
Posted by The Engineer at 4:38 PM No comments:

Email ThisBlogThis!Share to TwitterShare to FacebookShare to Pinterest
Labels: journey to center of earth, law of universal gravitation

Extremes in Engineering and Politics

As I watch the election season unfold in America, I am constantly stunned at how far to one side each party and their supporters are and seemingly must be.  It is, by and large, Republicans to the right, Democrats to the left, and no middle ground in sight.  When we categorize ourselves as one of these two extremes, we may enjoy the apparent sense of community that comes from it.  After some time, we begin to identify with one extreme.  However, as a whole, such categorization has the net effect of polarizing a nation.

In the twenty-first century, it seems that so many of us are unimpressed by an optimized solution.  There is nothing sexy about a calculated compromise.  On YouTube, it is the biggest this and the fastest that which tend to garner millions of views.  We simply are not interested in anything average.

I think that politicians ought to replace their segragating rhetoric with a middle of the road approach.  But the fault lies not only with them.  The voting population must recognize the value of a moderate approach.  Why do we tend not to award those who are steady and balanced?  Is it related to our fascination with outlandish personalities like those of the Kardashians?

Read more »
Posted by The Engineer at 2:01 PM No comments:

Today, for a change, I write of nothing scientific.  You may find it to be educational nonetheless, particularly if you do not reside in Canada, as it concerns the provincial election of its most diverse and bizarre province: Quebec.  As the majority of my readers reside in the United States, where an election with global impact is on the horizon, I will continue on.

Let's begin with some geography.  Canada has ten provinces and three territories.  Quebec is one of the bigger provinces in terms of both land mass and population, and is located towards the East.  It is rich in terms of water, and, as a result, is one of the only North American states whose energy production is primarily sustainable (hydro power).  The population of Quebec is concentrated along the St. Laurence river, which flows from West to East.  The city of Montreal, the second most populous in all of Canada, is an island along the St. Laurence towards the western side of the province; it happens to be my home.
Read more »
Posted by The Engineer at 4:30 PM No comments: