I am one of two Canadian members of the AIAA study group called: Road to the Space Elevator Era.  I like the name.  It will be a long road to get there, but once we arrive, a new era of space travel will commence.

In 2004, Professor Arun Misra introduced me to the concept of space elevators, and spent the next two years supervising my Master Thesis, which entailed the first ever in-depth study of the various aspects of its mechanics.  Today, some of my friends introduce me as "the Space Elevator guy".


What is the Space Elevator?﻿  In short, it is a revolutionary Earth to Space transportation system that will likely be implemented by man in the mid-twenty-first century.  A thin tether spanning 100,000 km connects a floating platform near the equator to a satellite that acts as a counterweight.  This system remains in a stable equilibrium because the net radial forces, gravitational towards Earth's centre and centrifugal away from it, are balanced.  Climbers may then scale the tether transporting payloads to space.  The result, in essence, is a vertical railroad powered via solar and laser technology. 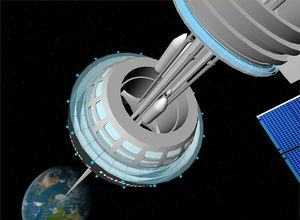 Artist's Depiction of a Space Elevator
(image courtesy of www.singularityhub.com)﻿

To get a real sense for how a space elevator could work, try out the Space Elevator Operator.

Why build a Space Elevator?  Five reasons quickly come to mind:
Listed below is a sample of published articles that I have contributed to the Space Elevator research initiative (Professor Arun Misra has co-authored each one):

The Effects of the Space Elevator Dynamics on the Orbit of a Launched Satellite, Advances in the Astronautical Sciences, Vol. 124, pp. 1995-2014, 2006