At first, an active encyclopedia written by and large on a volunteer basis sounds like an ill-conceived plan.  Considering that so much content on the internet is incorrect, the Wikipedia experiment was bound to fail.  But then, something strange happened: it actually worked.

The internet community, which can always be counted on for lewd YouTube comments dripping of ignorance and disrespect, somehow came together to compile a mass of information that is almost always factual (obviously, different parts of the community are at play here).  Yes, some donor money goes to pay tens of employees to overlook things, and do some fact-checking, but Wikipedia remains a database composed by tens of thousands of anonymous members of our global village, and is perhaps one of the best things to come out of the internet age.

Written mostly by amateurs, who have free time to spare, the volume of information grows at a staggering rate: thousands of pages per hour.  This kind of productivity at no cost, but reasonable quality, helps to explain why Wikipedia has flourished and the Encyclopedia Britannica has become all but irrelevant; oh, and did I mention it's free?

But here is the million-dollar question: "Do I encourage my science students to use Wikipedia?"

Read more »
Posted by The Engineer at 9:24 PM No comments:

What Kind of Star are you?

Despite constituting the vast majority of the matter in the universe, stars are surprisingly simplistic.  A star spends nearly all of its life in hydrostatic equilibrium, whereby gravity pulls it inward as thermal pressure pushes it outward.  This state is known as the main sequence, during which countless Hydrogen atoms fuse to form Helium ones, and release energy in the process.

OK, that might not seem simple.  But, a star is simplistic in the sense that its entire future is quite predictable given its mass when this thermonuclear fusion process begins.  We can predict how long this steady radiation will endure based on this mass.  One might think that more massive stars have more fuel to burn, and will burn for longer as a result.  Though more mass does mean more fuel, it also means higher temperature and pressure, which means a greater fusion rate.  Massive stars actually live a far shorter life than less massive ones - lifetime is roughly proportional to M^(-2.5), where M is mass.

In the graph shown below, the approximate time a star spends in its main sequence is shown as a function of its mass ratio to the Sun. 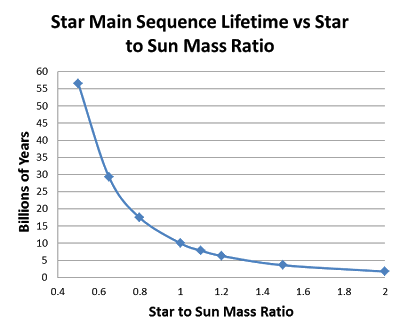