My daughter in the waiting room at the Dr's office...


We all learn Mechanics from a very early age.  The same could be said for much of the sciences.  We just come to know it in a very hands-on way.  The challenge for science educators becomes taking that practical understanding and leveraging it towards a strong theoretical one.  Physics does not live on paper - the analysis students must master is arrived at in a more organic way when it reflects the real world it exists in.
Posted by The Engineer at 11:09 AM 1 comment:

1.  My fence.  Two posts dug by hand and two long spikes hammered in.  One interesting challenge was removing the old worn-out fence that was in the exact same location.  A post requires something like 600 lbs of lift force in order to remove it due to the concrete at the base.  I drilled a large hole through these posts, inserted an old bench press bar, and pryed them up.  The bar bent, but it did the job.  Yay torque. 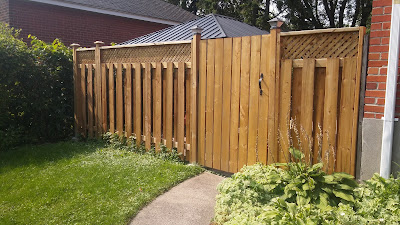 2.  My tree-house...er...my kids' tree-house.  I had at least as much fun making it as they do playing in it.  I propped up an old 3 by 4 foot pallet about 4 feet off the ground and built around it.  Requires a circular saw, a bench and a drill...and about 300 bolts.  You can see it in the corner where the two fences meet.  I also built a couple of obstacles for my kids who are training to be American Ninja Warriors, despite being Canadian citizens. 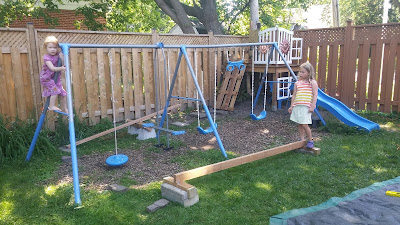 Posted by The Engineer at 11:04 AM No comments:

That Time I Nearly Died

My scariest moment in recent memory involved the most dangerous piece of home equipment: the ladder.  I have since discovered that a 12 foot ladder should be supported in three places while in use.  Go figure.

I have chainsawed through numerous small trees and long branches, but this one was different.  I needed to make a cut about 16 feet high - otherwise, the falling tree would have snapped the telecommunication wires.  It is not recommended to use a chainsaw while perched atop a ladder, but gosh darn it, the tree cutting company I called told me I would have to wait 5 weeks for them to do it, and I had a tree-house to build...

The tree in question was some sort of weed tree, with an 8 inch diameter, about 40 feet high and leaning significantly.  I leaned my 12-ft ladder up against the tree I was cutting.  Now that might sound stupid, and it turns out it is, but hear me out.  The ladder's friction contact was a couple of feet below the cut point...

With a friend at the bottom of the ladder (like he could actually do anything from there besides have a great view of my demise), I stood on the second to top rung of the ladder, leaned forward with two hands on the chainsaw, and began to cut. With the cut 80% the way through, I heard a snap, which is expected.  What I did not expect is that the cut would cause the portion of tree BELOW the cut to split in half.

I am 12 feet in the air, with two feet on the ladder, two hands on a chainsaw, and I am going for a ride.  The ladder revolved about its base by about 15 degrees (I descended a few feet) until, thankfully, it made a firm contact with the tree somewhere else.  I, in a state of shock, slowly scaled the ladder back down to the ground, and confirmed that all of my body parts were still present.

In hindsight, even had the tree not split, the situation is still far from safe: when the upper portion is cut off a hanging tree, the lower part that is not cut is suddenly supporting less weight, and could shift its angle accordingly to a new equilibrium position.

Next time, I will attach the top of my ladder to something solid with a rope before making such a cut, or, more likely, I will wait for the tree cutting company to do the job for me.
Posted by The Engineer at 10:52 AM No comments: