Newton's Second Law (Life as a Mass on an Inclined Plane)

The motion of a mass on an inclined plane is perhaps the most classic introductory mechanics problem.  Over the years, as a student, and then later as a physics teacher, I have analyzed more than my fair share of these kinds of scenarios.  I must admit, as an engineer, I have yet to encounter a problem of this type in the field – I have never been asked to design a block or inclined plane, nor have I been asked to verify whether Newton’s 3+ Century-old laws still apply to it.

Do I think all of the time that physics students spend examining masses on inclined planes is wasted?  Of course not – the simple scenario clearly illustrates the most important law of mechanics (Newton’s Second Law), and is a necessary stepping stone towards analyzing more complex situations.

There is, I believe, a secondary usefulness to examining such systems that extends beyond the practical realm.  Let us take a close look at a mass as it slides up or down a banked surface; I contend that it serves as a powerful metaphor for life.

I know what you are thinking: this guy has drawn one too many free body diagrams.  Correct.
Read more »
Posted by The Engineer at 9:38 PM No comments:

Science is my favourite realm of study.  Although physics is the branch that I am most comfortable with, I find science as a whole very fascinating.  It seems to me that science can be broken down into five categories: physics, chemistry, biology, psychology and sociology – in that order.
How do these five pillars relate to one another?  What is their connection?  Consider the following simple organizational chart. 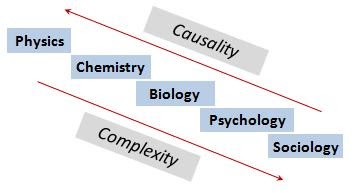 A Scientific Road Map
Read more »
Posted by The Engineer at 3:04 PM No comments:

Christopher Hitchens on God and Religion

The real “miracle” is that we,
who share genes with the original bacteria that began life on the planet,
have evolved as much as we have.
- Christopher Hitchens, God is not Great
After reading an article of mine, which discussed God’s role in the universe, a friend recommended that I read the work of Christopher Hitchens.  He is an intellectual, a journalist, and a proud atheist.  He famously enters debates with religious leaders or advocates, and clearly comes out ahead (a quick YouTube search will confirm as much).  On top of having a sharp mind, he has a cunning wit, and does not hold back for fear of insulting those on the other side of the debate, or those who watch such debates intently.
I recently came upon Hitchens’ 2007 book, “God is not Great: How Religion Poisons Everything”.  It turns out that Hitchens is every bit as forward as a writer as he is as a speaker.  He devotes nearly the entire book to debunking various religious myths; from west to east, no religion is spared.  The theme throughout is the notion that freedom of thought and expression have been repressed by barbaric religious leaders throughout mankind’s history, and it is time that such bullying come to an end.
Read more »
Posted by The Engineer at 10:28 PM 2 comments:

In the month of June, as most students are beginning to think about summer camp, or a temporary job, some students are beginning a new semester of school.  Whether they are retaking a failed class or trying to get ahead in their studies, summer school is not how most adolescents would like to spend their summer.
I have an unusually high interest in the notion of summer school this year because, for the first time, I will be teaching a class during these hot months.
Summer courses are much like fall or winter courses.  The classrooms are the same, but tend to have fewer students in them, and are filled with much hotter air.  Most institutions I know of, mine included, have no air conditioning.  I plan on wearing sandals to work.
I suppose the main difference between regular semester courses and summer ones is that students sitting in class during the summer do not want to be there.  Let me rephrase that ... However much a student wants to be in a classroom under normal circumstances, they want to be there in the summer less.
Read more »
Posted by The Engineer at 9:58 AM 2 comments: