Locating the Sun Whenever

At around dusk on a recent evening, I came to a logical conclusion while staring up at the half moon in the blue sky.  The Sun was hidden by this time, but I was able to draw a conclusion about its whereabouts.  I just needed to use the Moon as a guide. 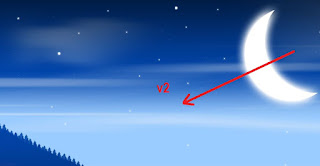 Vectors v1 and v2 form a plane.  The center of the Sun lies in that plane.  Think about it.
Posted by The Engineer at 11:04 AM No comments: