"Mama always said, life was like a box of chocolates..."  Had Mama been a physicist, she may have instead used non-conservative forces as an analogy to depict life's winding roads.  Let us first explore the meaning of a non-conservative force, and then attempt to draw parallels between it and life.

In physics, it is important to understand the distinction between conservative and non-conservative forces.  For one thing, it comes in handy when trying to solve problems using a work/energy approach, which countless mechanics students are no doubt busily doing as I write.

The conservation of energy principle is merely a statement of the first law of thermodynamics, which, for mechanics, translates to: "The change in the total mechanical energy of a system between states 1 and 2 is equal to the total work done on the system by non-conservative forces between states 1 and 2."  The term 'state' refers to a particular position and velocity of the system's components (time does elapse in between states, but the particular amount is not significant for the analysis).

By now you have no doubt heard that Felix Baumgartner has shattered several records with his successful sky dive on October 14, 2012.  Fearless Felix stepped off of his perch, fell freely for 4 min 18 sec, and then pulled his parachute, coasting safely to the surface about five minutes later.

The lead up to the historic event was similar to that of a rocket launch, complete with weather delays.  This jump was originally set for October 8, but on several occasions, it got bumped.  You know you are involved in something risky when a little too much wind is cause for serious worry.

Imagine you are Felix, and you wake up on October 8, having probably not slept much the night before, ready for the leap of your life.  You down a few red bulls, get your adrenalin up, and then some guy in a lab coat gives you the news that the jump must be postponed.  Repeat this a few more times, and you just might go mad.  I do not know this for certain, but I would imagine that a psychologist was on site with Baumgartner to help him maintain his mental well-being through this go/no-go roller coaster that lasted more than a week.

Many videos of the dive have circulated on YouTube, though most have been yanked by the sponsor (Red Bull).  Here is their 90 second summary of the event.

One can only imagine what it must have been like to look down from 128,000 ft (8,000 ft more than originally planned), and to behold the planet.  From that altitude, one can begin to get a sense of the Earth's curvature.  With a final salute (to his family, and mankind I suppose), Baumgartner stepped off from his pod and quickly vanished from view.

Based on some of the information given in the video, as well as some educated guesses, I have constructed approximate graphs of Baumgartner's speed and altitude as a function of time for the free-fall portion of his descent.

(Note that it is possible to generate theoretical results by solving the governing equation numerically, but as I do not have access to the particular parameters associated with his specially designed space suit, such as mass and drag coefficient, I elected to plot these 'experimentally') 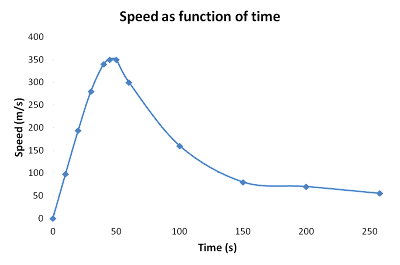 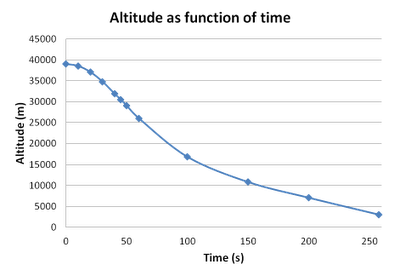 For a normal person, it represents the distance travelled during a fairly long commute to work.  For Felix Baumgartner, the Austrian daredevil, it represents the altitude from which he plans on free-falling towards the Earth this coming Monday, October 8, 2012.

For someone like myself, any height is too high to jump from with nothing but a parachute to save me from death.  However, even sky divers, who are themselves barely sane, see Baumgartner's jump as nothing short of lunacy.

You see, 120,000 feet is 36,576 m - that's more than 36 kilometers!  To put this into perspective, his descent will begin at an altitude that is three times that at which typical commercial airplanes fly.  It is above the troposphere, in the middle of the stratosphere.  So, "How will he get there?" you ask.  Why, he will wait inside a man-sized pod that is lifted by a large balloon, of course.  When the balloon reaches the correct altitude, the pod will open, and down he will fall.

There are literally countless risks associated with this particular sky dive that aims to crush the previous altitude record of 102,000 feet.

To begin with, the air way up there is extremely cold.  Should Baumgartner's special suit fail even a little, the convection associated with the high speed sub-zero air flowing by him will freeze him almost instantly.

Not only is it much colder up there, but the air pressure is just 1% of that on the surface.  For this reason, the daredevil will have an oxygen tank strapped to him.  And, with this pressure change, comes a change to the most important environmental factor when it comes to aerodynamics: fluid density.

The density of air on the surface of the Earth is about 1.2 kg/m3.  In the middle of the stratosphere, it is more like 0.01 kg/m3.  A quick application of Newton's second law shows that this has a dramatic effect on the terminal velocity of the dive...

A sky diver reaches his or her terminal velocity when his or her body ceases to accelerate.  When this inertial term vanishes, we are left with a simple force balance: Drag force = Gravitational force.  The force of gravity can be approximated as mg (even at an altitude of 36 km, using the gravitational acceleration one experiences on the surface of the Earth, 9.8 m/s2, introduces very little error).  The drag force is a bit more complex, and is given by:


Drag force = (1/2)ρCDAv2
In this expression, ρ is the density (kg/m3) of the fluid, CD is the drag coefficient (unitless) of the falling body, which is essentially a measure of how aerodynamic it is (it is greater for objects that are not streamlined), A is the projected surface area (m2) of the body, and v is the relative velocity (m/s) of the body with respect to the fluid.  It is clear that drag is largest when large objects move within dense fluids at high speeds.  This is why we can often ignore drag for, say, a ball that is tossed through the air by a child.

Substituting these parameters into the force balance and solving for v, we get the terminal velocity equation as follows: