Some weeks ago, as my class was discovering notions of relativity, a student asked what I thought of the bizarre videos that were making its rounds on the internet - they reveal what appears to be some kind of unusual aerial vehicle.  I watched these black and white videos with curiosity.  In the background, you can hear some excited voices expressing genuine confusion about what they are witnessing.  With final exams looming and little free time, I did not pursue this rabbit hole any further.  Then weeks later, a friend we'll call 'Phil', asked what I thought about the UFOs.

Tom is a staunch believer in the scientific method and a skeptic when it comes to conspiracies and the like.  But he found these videos to be very compelling.  He informed me about Luis Elizondo and the Advanced Aerospace Threat Identification Program (AATIP) and suggested I watch his recent interviews.  I did.  I also came across a clip of Barack Obama giving credence to the notion that the highest levels of American intelligence have come across aerial vehicles whose origins confound them.  It appears that AATIP is indeed a genuine Pentagon program and they will issue an official response to the aforementioned videos.

I impressed upon Phil that I am typically not drawn into stories of this nature due to the extreme unlikelihood of alien visitation.  However, if these videos were real artifacts, free of manipulations, they reveal technology that is far beyond current human capability.  The aerial vehicle in the videos:

1. Has no visible means of propulsion and whatever does propel it shows no sign of interacting with the environment.

2. Transfers from air to water without disturbing the water.

Let us, for instance, analyze point 3.  The vehicle is tracked at speeds in excess of Mach 5 (five times the speed of sound in air, so about 1,650 m/s).  In order to not experience violent accelerations in excess of 5g (about 50 m/s/s), the minimum radius that its circular path would require is 36 km!  Points 1 and 2 are even more bewildering.

If these videos are authentic, how did the vehicles get here undetected by our radio astronomers?  Elizondo theorizes they emerged from the deep ocean.  Phil asked me where we should purchase our aluminum hats.

Passing on the hats for the moment, I went to the library later that day, and returned home with They Are Already Here: UFO Culture and Why we See Saucers, by Sarah Scoles.  The book is a historical account of the human obsession with UFOs and the possibility of alien intelligence, from Roswell and Area 51 to AATIP.  The title to the book is misleading: the author confides on the last pages that she remains unconvinced that any interplanetary intelligence has ever visited Earth, and that the plethora of reported human encounters with aliens are either honest mistakes or fabrications.

I am interested in honest mistakes, as they force us to apply the scientific method within this thought-provoking context.  These range from explainable celestial events, to high-tech military operations, and a wide range of optical illusions.  I also understand and do not fault claims of UFOs that are entirely psychological, whether they be drug-induced or convincing dreams.

On the other hand, fabrications offend me.  They are an affront to my senses.  They degrade the entire process of discovery.  Muddying the evidence, manipulating the data, unfalsifiable claims masked as truths... These acts of dishonesty, whatever their motivation, highlight the fly in the ointment, which is human corruption.  Such acts of deceit serve only to spoil the earnest endeavor of identifying UFOs.  One key take-away from Scoles' book is that distinguishing genuine science from hoaxes is half the battle in the search for alien intelligence.

When it comes to the matter of extra-terrestrials, we must be extra skeptical of information emanating from sources who have a vested interest in making the first human contact with them.  One such player is Robert Bigelow, a wealthy American who has initiated numerous 'scientific teams' whose primary outputs have been UFO fabrications.  When I discovered that Bigelow has a connection to AATIP, I began to doubt the authenticity of the internet videos.

It is improbable that we have been or will ever be visited by interplanetary beings during our species' tenure on this pale blue dot.  The chances that intelligent life exists in our neighborhood of this galaxy during the small window of time comprising human existence are very low.  But not zero.  And that is what distinguishes the topic of aliens from other human obsessions, like paranormal activity.  The former is entirely conceivable according to our current understanding of nature.

Evidence that confirms the existence of aliens would cause a dramatic shift in our understanding of the universe and our place in it.  That is why this conversation is so alluring.

I await the Pentagon's response to the videos that have captured the attention of so many.  If their  assessment does not support the alien intelligence theory (and I highly doubt that it will), conspiracy-theorists will be unmoved.  Government history does include cover-ups, which merely confirms the general prevalence of human weakness.  This history of dishonesty injects doubt into the UFO conversation.

I will not be buying an Aluminum hat just yet.

Posted by The Engineer at 9:01 AM No comments:

The semester has ended, and alas, nobody posted a solution to the difficult problem I posed months ago (see problem here).  In short, we have a rope that is suspended from the top and is being moved along a circular path in the horizontal plane with constant angular velocity.  Aerodynamic effects shall be neglected.  We are seeking a lateral deflection function.  Here is my solution...

With a problem such as this, we must begin with a physical model.  My hand drawing is seen below (I apologize for the crude sketch, but the summer me exerts less effort): 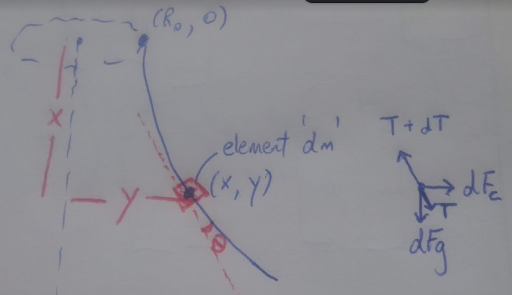 The solid blue line represents the rope whose profile we aim to determine.  At some location (x, y), we will apply Newton's second law to a single mass element dm.  My free body diagram is on the right side.  There are two external forces acting on the element; one is real and the other, a pseudo-force.  The real force, dFg, is gravitational, while the centrifugal load, dFc, is a pseudo-force as it is effectively an inertial term.  Finally, tension acts internally, pulling this element in both directions tangent to the rope's profile at (x, y).  The upward pointing tension is (correctly) assumed slightly higher than the downward one, by some amount dT.  One useful, though limiting facet of the assumed model, is that, at a given vertical location x, each element simply displaces horizontally - in reality, it also shifts up vertically, ever so slightly.  This simplification allows an elegant solution, but whose accuracy is limited as we shall see.

Applying Newton's second law to that element on both axes, we get:

We can express the elemental forces as:

The key realization to move forward is that the derivative dy/dx = tanθ.  This yields the governing equation:

The particular solution to equation 6, after having applied the boundary condition y(0) = R0, the radius of the enforced circular path, is given by:

This solution is quite interesting.  We first notice that the density and area of cross-section of the rope have no effect on the shape it takes.  This is not surprising because both external forces were proportional to the elemental mass.  The more important takeaway here is that the lateral deflection becomes exponential.  The faster we spin the top of the rope, the more dramatic the curve.  This makes sense, but there is a serious flaw: the rope has a finite length.  As this function is exponential, there is no limit to the lateral deflection it describes.  As the imposed angular velocity increases, the lateral deflection can quickly become greater than the total length of the rope, which is physically impossible.

I suspect that I ran into this problem because, in my original model, I neglected the gain in altitude that a particle driven laterally inevitably experiences.  For fun, I included this effect in a subsequent attempt.  After a page of work, I saw that numerical tools would be required to solve.  Again, it's summer, and I am content to move on and not pursue this problem further, especially when a closed solution appears impossible.

Equation 7 may be a good approximation of the rope's profile for fairly slow rotation rates.  An experiment is difficult to conduct for multiple reasons. While air effects lead to a three dimensional profile, so to would inertial effects when it comes to establishing planar motion.  In principle, it may be possible to enforce the theoretical equilibrium configuration as well as a uniform angular velocity for all string elements, but it is not practical.  Failure to do this would inevitably lead to a helical 3D profile.

You may be thinking I did all that work for nothing.  It is important to realize that simplified approaches teach us a lot about complex problems.  They give confidence to the more strenuous, complex solutions that follow them.

And now, out of my cave.  Summer beckons.

Posted by The Engineer at 9:16 AM No comments: