You can Count on Asimov

Isaac Asimov is on a short list of my favourite science authors.  The list has two names on it: Arthur C. Clarke and Isaac Asimov.  Both write excellent science fiction (Asimov's "I Robot" and Clarke's "Fountain's of Paradise" are my personal favourites) and both write excellent topical science articles and essays.  While Orson Scott Card writes some compelling sci-fi (Ender's Game is probably my favourite novel of all time), he is not a "popularizer" of science - it is rare to find an author that is skilled in both fiction and non-fiction.

Asimov may have been the most prolific author ever, having published upwards of four hundred pieces.  His direct style in story-telling and, at times, redundant style of communicating in non-fiction does not appeal to everyone, but it does appeal to me.

Asimov's largest volume of work involves the communication of science, but physics in particular.  I just finished reading "Asimov on Numbers," which involves mathematics, but really focuses on, well, numbers.  It is a collection of essays written over a period of many years, beginning in 1959.  Although all articles are between four and five decades old, they have aged well.  The only instances where the book feels old is when population and financial figures are discussed, as the absolute values of both have inflated significantly in the ensuing years.

I learned a lot in reading these essays, mostly about the history of mathematics (very fascinating) and the Earth's geography (which, as it turns out, can be described so well numerically).

Read more »
Posted by The Engineer at 3:29 PM No comments:

A Big Day for Science Geeks

There are two interesting developments to discuss, so let's get right to them:


1. Today, several chunks of a decommissioned satellite will strike the surface of the Earth (hundreds of kilograms at hundreds of km/h)

For the past week, earthlings have been warned that a defunct satellite will enter the Earth's atmosphere on Friday, Sept 23, 2011.  Unlike small satellites, this one, the size of a bus, will not entirely burn up upon re-entry.  Although the simulation is hard to predict with high precision, it is certain that a significant portion of the satellite will survive the re-entry, and will find a terminal velocity in the region of 300 km/hr.  Like the weather, aerodynamic problems involving extreme heat transfer are difficult to solve with much accuracy long in advance.  The location of where on Earth these satellite chunks will land is still somewhat up in the air.

NASA explained last week that this should not worry us, as there is a 75% chance that the said pieces will hit water (gee, thanks for the geography lesson).  As of this morning, we now know that the satellite pieces will strike the Earth in its Southern Hemisphere.

This sort of thing happens roughly once per year...

I learned how to play the guitar about thirteen years ago, towards the end of high school, because I hypothesized that it would attract the ladies.  Fortunately for me, it attracted one lady in particular, and I ended up marrying her.  Although this case study was limited to one specimen, I think further investigation would lead to a strong correlation between guitars and ladies.

Over time, the guitar has become much more for me than a tool for garnering attention around a campfire.  The six-stringed instrument has sat on my lap for countless hours, as I figure out songs that I enjoy, perform them live, or just sit alone strumming nothing in particular.  It’s amazing what a wonderful diversion those twelve notes can provide. 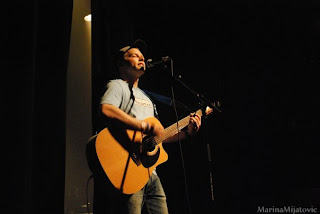 I have written previously about how a pulse can travel along a string that is in tension.  What distinguishes the behaviour of a stringed instrument is that both ends of the strings are fixed.  The phenomenon that occurs when a taught string is plucked is known as a standing wave.  The note that we hear, its frequency, is dependent on four parameters for the given string: its length (L), tension (T), mass per unit length (µ), and mode number (n).  The frequency in Hz is given by the following equation:

The Infrastructure is Crumbling, but Don't Panic

As a Montreal resident, I sometimes wonder if the roads are as bad in other major cities.  It seems as though the roads within the province of Quebec suffer from a contagious disease constrained within its borders.  The disease transforms an otherwise developed nation into Colombia with snow.

The moment you cross the border into the United States, the crater-sized potholes vanish and the uneven surfaces become smooth.  If you listen closely, you can hear the suspension system of your car breathe a sigh of relief as you leave Quebec.  If you happen upon a road imperfection while driving in the states, it will be most certainly preceded by one or two warning signs.  If every hole in Montreal's roads were well-marked, there would be no space left for the speed limit signs (which we don't follow anyway, but that's another story).

In truth, dodging potholes and bouncing around in one's car is part of the quebecois experience; the locals have grown accustomed to it.  What the public will never come to accept, however, are falling overpasses and tunnels.  Over the past five years, several such incidents have occurred in the city of Montreal.  In the summer of 2011, reports of a major structure crumbling in some way seemed to become a weekly tradition.  Due to the local media coverage of these incidences, the average Montrealer now knows what a gusset is, and could probably submit a decent draft for our next bridge's design.

Let's first examine why structures fail, and then look at why so many are failing these days in particular.

The terrorist attacks that occurred in New York City ten years ago is all that anyone seems to be talking about these days.  Whatever the medium, wherever I turn, I am reminded of how the world changed on Sept 11, 2001.  Strangely, it seems that much of the conversation about this terrible event surrounds the possibility that it may have not been a terrorist attack at all.

As a scientist, I can appreciate the desire to question things and dig deeper for the truth when things do not seem to add up.  In the case of 9/11, as with the moon landing (which, of course, did happen), the "deniers" or conspiracy theorists are wasting their collective breath.

Read more »
Posted by The Engineer at 2:34 PM No comments:

Death by Numbers: The Dangers of Exponential Growth

Physicist Dr. Albert Bartlett believes that man’s greatest shortcoming may be his inability to understand the exponential function.  A long time member of the faculty at the University of Colorado at Boulder (since 1950), Bartlett has given his famous lecture, “Arithmetic, Population, and Energy,” 1,600 times over the past fifty years.  Add to that millions of hits on YouTube, and it may be the most viewed lecture of all time.

Dr. Bartlett, now nearing ninety years old, is still eager to inform others about the least discussed major issue that mankind faces: overpopulation.  While politicians move their mouths on topics from unemployment to global warming, not since Nixon has a leading politician uttered the word overpopulation.  Telling society that we are our own worst problem is not a popular thing to do; it is, on the other hand, a very responsible thing to do.  Overpopulation exacerbates both global warming as well as unemployment, not to mention poverty, at the local and global level.
Read more »
Posted by The Engineer at 3:30 PM No comments:

Even Superman Can’t Turn Back Time

I, like many men that are 30 going on 13, have always had an affinity for superheroes, and in particular, superhero movies.  There are so many reasons why this genre of movie appeals to me, but what I enjoy first and foremost is the notion of fantasy set in reality.  Among my favourites are The Watchmen, Batman (the original and the Dark Knight), and X-Men.

I must admit, there is a certain inherent fallacy to the notion of fantasy set in the real world.  Some stories, like that of Star Wars, avoid any real world association, as they are set far from the world we know in both time and space.  Fantasy set in reality presents an internal conflict for the viewer: “Do I just go with the fantasy and ignore reality, or do I go with the reality and question the fantasy?”
While the first option allows one to achieve the escapism that such films offer, my mind has trouble turning off completely, and I tend to walk a line somewhere between both options.  A premise such as that of The Matrix avoids this issue, as it offers a compelling reason for why the rules of the universe, the laws of physics, need not apply.

While nearly any sci-fi movie, if analyzed carefully enough, can be criticized for taking liberties with science, the award for “Most ridiculous violation of the laws of science in one scene” must go to the climactic finale of the first Superman film.  [As an aside, the award for “Most consistently false science throughout” may be shared by Armageddon and Independence Day.]
Read more »
Posted by The Engineer at 9:55 AM 18 comments: