I had so much fun with the rope problem I posted to start off 2021 (which was subsequently solved by Anthony Attia - see his elegant solution here), that I want to continue to explore this theme.  While that problem seemed tough (seeking the steady state profile of a uniform rope pinned at its top end and suspended vertically in a uniform horizontal wind), it turned out to be fairly simple.  It was almost disappointing.  To remedy the situation, consider an even more intriguing problem...

Imagine a Tarzan rope (bulk density 'p') that you suspend vertically in uniform surface gravity 'g'.  You then take the top end of the rope with length 'L' and move it with uniform circular motion in the horizontal plane (radius 'R' and angular frequency 'w').  Ignoring aerodynamic effects (because that would cause a 3D problem and have no clean analytical solution), what profile will the rope assume?  That is, if we froze the video at any given instant, what lateral deflection function, y(x), describes the rope's shape?  Treat the rope like a string (cannot support shear loads).

I spent some time on the problem, and it turns out to be even more interesting that I expected.  I will not give any hints this time.  I am curious to see if anyone will post a solution.  If you do, please provide a description of how you did it.

I am excited to share my solution, but I will be patient, and see what, if anything, gets submitted here.

Posted by The Engineer at 6:09 PM No comments:

A Tarzan Rope in the Wind (Solution)

This is very exciting: a former student of mine, Anthony Attia, has submitted a solution to the Tarzan rope problem I posted some weeks ago.  Anthony was in my Mechanics class at Vanier College in 2016.  He is now pursuing undergraduate studies in mechanical engineering and simultaneously doing a stage at my former employer, MDA Space.

As is the case with some students, Anthony and I have stayed in touch since he graduated from college.  This post, however, is the first one in more than ten years of this blog's existence that someone other than me has written; it is about time.  Watch as Anthony analyzes a uniform rope, pinned at the top and vertically suspended, subjected to a horizontal uniform wind.

When faced with a complex physical phenomenon, it is quite common to simplify the problem to a point where an analytical solution can be formulated. The simplification is done by stating assumptions throughout the approach. The more assumptions we take, the more likely our approximated answer will diverge from the true value. As students of science, it is our duty to ensure that we are equipped with enough knowledge to apply the proper assumptions.

Tarzan’s rope problem can be as complex as we want it to be. We can treat the rope as either flexible or rigid, we can treat the wind force as a function of time or a constant, we can consider the effects of cold temperature on the characteristic properties of air or we can neglect them. For the sake of maintaining my sanity and that of the reader’s, we shall treat the rope as a pinned rigid body who is subjected to a constant drag force that is acting in the horizontal direction. An important fact about assumptions is that there cannot be an incorrect one per say, however, every single one of them must be justified.

In my preliminary analysis, I will assume the rope to be rigid, effectively assuming that the profile of the rope will be linear when displaced.  Generally, this assumption would not be valid with a rope, but I will make it anyway and check the extent to which it was good later.

With that in mind, we can begin trying to find the velocity of the wind, by relating the drag force FD and the weight W.  Consider the model below, which depicts the scenario: 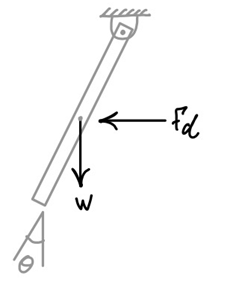 Given that the net drag force is acting on the center of gravity in the horizontal direction and the weight is acting in the vertical direction, the ratio of these forces, FD/W, ends up being equal to tan(θ).  We can take the sum of all torques about the pin and put them equal to zero.  Then, using the following definitions, we may express the wind speed as a function of the other parameters.
Surface gravity: g
Air density: p
Wind speed: V
Rope angle: θ
Rope mass: m
Rope diameter: d
Rope length: L
Rope shape (cylinder) coefficient of drag: Cd

The wind speed is then given by:

Knowing this, we may begin computations to determine the wind speed that causes a specific rope deflection.  Assuming some reasonable 'Tarzan rope' values, it takes a 15 m/s wind to rotate the rope by 30°.  This seems reasonable.  But, we can only feel so much confidence in this result, as it is based on an assumption that may not be justifiable.

Say, however, that we now want to treat the rope as a flexible body; how would we proceed? Before answering that question, we must properly understand the behavior of weight and drag. In the previous figure, the drag force was lumped into a single vector whose line of action passes through the center of mass of the rope.  Let us do a quick thought experiment: if we were walking headwind, would our entire body feel pushed by the drag force or just a single point? The answer is the former.  So, why did we draw a single vector? That vector is actually the resultant or net drag force acting on the rope. If we were to properly illustrate the aerodynamic force that the body is subjected to, we would have to draw many smaller vectors that are acting on the entire exposed surface. These types of forces are called distributed load: though they act on every point of the body, we may sometimes use a single vector to represent the resulting effect (note that gravity is similarly distributed and then a resultant is used). Every segment of the rope has a mass equal to dm and the sum of all segment masses will yield the total mass m. Now, to solve the flexible body problem, we must assess a differential segment dm that is exposed to a differential drag of dFd by drawing its free body diagram. 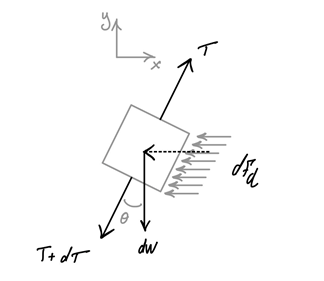 Newton’s second law in x and in y yields:

These equations simplify to:

Equalizing the two equation we get:

It is evident that the equation obtained for the flexible body problem is the same as the rigid body problem, however, it is in a differential form. To remove the differentials, we must apply an integrating operator to the equation.  If we do so, the same expression linking the angle to the wind speed is obtained.
We conclude that both approaches lead to the same answer, but one requires an understanding of calculus, whilst the other requires only an understanding of mechanics. As one of my professors used to say, the simplest solution is often the best solution!
___________________________________________________________________________________
It gives me much pride to see a former student of mine express himself as he does here.  I get the same result on my end as that which he found.  The reason that the rigid body assumption works is because, due to the symmetry of the scenario, the uniformity of the fields and rope, the rope's profile must be linear.
In this problem, we have the weight force and the drag force.  They act vertically, and horizontally, respectively, onto each element.  While weight acts on dm elements, and drag acts on dA elements, both are uniform: we may think of each as a uniform field.  Effectively, they combine to form a uniform net field, and the rope simply aligns itself with it.  Though I initially thought the rope would have some curvature, it does not.  I am almost disappointed that the result is so simple.  I will try to pose a problem that has a stranger result in my next post.
Still, what I really want to emphasize here, is something greater than the problem itself.  I am thrilled that The Engineer's Pulse just had its first guest writer; he happens to be a fine engineer in the making.

Posted by The Engineer at 11:50 AM No comments: