Unraveling the Mechanics of Spider-Man's Web

My three-year-old has an obsession with Spider-Man.  She has been putting bad guys in jail for the past week with the help of her Spider-Man action figure.  So, being who I am, I could only resist conducting a mechanical assessment of the fictitious hero's web for so long.

I have deconstructed the physics of superheroes before.  My approach is to ignore the mutation aspect - to accept the background story that gave the hero his or her powers.  My concern is instead, given such powers, is the rest reasonable?  For Spider-Man, I'd like to focus on the web that he shoots from his wrist to the buildings of New York City as a principal means of transportation.  Can a thin web realistically sustain the tension that manifests within it when Spider-Man swings through the city?

Consider the awesome illustration below (mad 'Paint' skills) that shows the famous web-slinger swinging from the top of a building using web length 'R'. 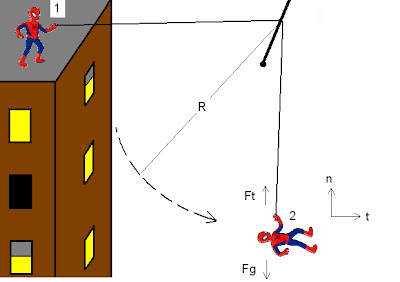 If Spider-Man is initially at rest (at 1), then a simple energy conversion analysis (gravitational potential energy converts to kinetic energy) shows that at the bottom of his swing (at 2), his speed v is given by (2gR)^0.5, where g is the surface gravity.  Here, aerodynamic effects were ignored as were any elastic or visco-elastic effects associated with the web.  A free body diagram for Spider-Man is drawn in the figure at the instant the web is vertical (at 2).  The tension in the web points up while the gravitational force points downward.  Applying Newton's Second Law in the normal (n) direction gives the following (note that there is an upward acceleration associated with this circular path):

This result is somewhat surprising.  It shows that the maximum tension in the web during a swing from rest is 3mg regardless of the length of the web.  Though a longer web results in a greater speed at the bottom, the centripetal acceleration at that moment, 2g, is independent of R.

The pressure, or stress, within the web is the tension force divided by the cross-sectional area of the web:

Let us assume that Spider-Man's mass is 80 kg and that the cross-sectional area of his web is 1 square centimeter.  We then find that the stress within the web when Spider-Man is at the bottom of his swing is 23.5 MPa.  A spider's web has a strength similar to that of high strength steel, which is about 1000 MPa.  So, Spider-man's web should have no trouble sustaining a stress of 23.5 MPa.  Even if we double the mass (say he were swinging along with Mary Jane Watson), Spidey's web easily passes the strength test.

Where the web begins to run into trouble is when we consider its weight.  The density of web (about one sixth that of steel) is roughly 1.3 g/cm^3.  Spidey sometimes spins webs as long as the height of the buildings he swings alongside (say 100 m).  The volume of such a web (again we assume a cross-sectional area of 1 cm^2) would be 10,000 cm^3.  The corresponding mass is 13,000 g or 13 kg.  That is one heavy web, and a disturbing amount of mass to lose every time he takes a swing.  I mean, 13 kg is a pretty big proportion of his total mass.  I would have to conclude that Spider-Man defies the principle of conservation of mass.

While we're at it, why does his web stay straight as he shoots it?  It really should bend according to gravity.  Furthermore, it should bunch up.

You may be wondering how I could be so critical of the mechanics of Spider-Man's web, yet overlook the radioactive spider that permanently altered his DNA.  I agree, it does not make much sense.  But it is a fun exercise, and that is justification enough.  If my daughter gets to have fun with Spider-Man, why can't I?
Posted by The Engineer at 2:34 PM

Who says superheroes are for kids only? Also imagine how boring superheroes would be if they obeyed every rule in physics.

Take thor in the avengers and how he spun his hammer to jump really high... If it obeyed physics he would have had to throw it downwards so the change in momentum would launch him up. Then he would go up even further when it magically came back to him.
But is that cinema magic? No.

Jonas, I state in the article that I am comfortable with a lack of reality in superhero stories. I just like to encourage critical thinking (I teach physics at a college), and find analyses of this sort useful for developing one's critical thought.

Actually, I found that this was a good article, I just wanted to throw in my two cents.

I know this is an old post but imagine throwing a piece of thread at a building 400 meters away as spidey does in some of his movies. The web doesn't come out in a 13 kg clump and unravel as it travels toward the building. It comes out in a thin thread and travels considerable further then 100 meters in many instances. The velocities required to do this are tremendous unless spidey has some way to maintain web rigidity so the web behind is pushing the web in front. Course this ridgitity would have to convert to flex once the web made contact. You can't throw a thread at a wall much less a building! Absurd.

Anonymous... An excellent point. My analysis in this article is for the already established web connection. The web-slinging mechanism is completely absurd.

Neat Anthony! The difference here is that air currents are what propels this slowly along. In the case of a human mass, the web mass would be influenced by gravity. His web should fall limply to the ground lol.